All effective healing procedures must involve two key points: building up body energy and relieving toxins. The three following traditional Chinese detox treatments have been practice in China for thousands years. The commonality of these therapies is using non-intrusive techniques to relieve toxins.

The following pictures present the process of how the traditional Chinese detox treatment works:

Cupping was originally from ancient China. now, it have been used in Turkey, Greece, France, Italy, and Eastern Europe. Cupping has a long history of use in acupuncture practice and has been combined with bloodletting, but it is a therapy in its own right. 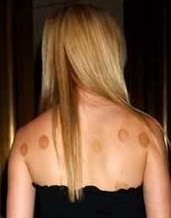 Cupping is a safe, non-invasive, and inexpensive technique. It is used by practitioners of Chinese medicine to treat colds, lung infections , and problems in the internal organs. It is also used to treat muscle and joint pain and spasms, particularly on the back. Cupping therapy is thought to stimulate blood circulation.

According to traditional Chinese medicine, illness is caused when Qi (the life energy) does not move properly in the body. Acupuncturists are trained to determine where Qi is stagnated, weak, or out of balance.

How Does Detox Cupping Work

Acupuncturists use cupping for specific problems in the flow of Qi. Cupping disperses and moves Qi by exerting suction and pressure. Cupping is used when the Qi is blocked at certain points, or when Qi needs to be drawn to the surface of the body from deep within. For instance, cupping is used to treat lung infections and colds, because it is believed that the suction disperses and energizes the Qi that has become blocked and stagnated in the lungs. Cups can also pull out "wind-cold" that in Chinese medicine is believed to cause lung infections.

Modern cups are made of strong glass. The cup is placed directly on the skin to create vacuum by using pumps to achieve the proper suction. Often, the skin inside the cup visibly rises. Cupping is generally a painless procedure.

Cupping can cause blood to be drawn to the surface of the skin, which can cause red marks, swelling, and bruising. These are signs of your blood stagnate status. When your body is toxins-free, it will not leave marks. The more toxins your body has, the darker the bruising marks will be.

After treatments, you will feel much painless, relaxed and a little bit tired. We recommend you wear warm clothes, take shower next day, maintain fluid intake, and have warm and cooked food.

Gua Sha was used in China as early as two thousand years ago. The ancient therapy is simple non-intrusive and very effective.

The principle of scrape therapy is similar to that of acupuncture and cupping. Both are used to circulate stagnant blood and qi (vital energy) in muscles and other soft tissues of the body. Gua Sha moves, circulates and releases blood trapped in the peripheral capillaries. Gua Sha releases the exterior Sha syndrome by moving body fluids and blood, stimulate blood flow and help to discharge the coldness and negative energy through the skin. The skin will feel warm and the presence of redness is often seen after a Gua Sha treatment. This redness or purplish hue to the skin is trapped or congealed blood that is not circulating properly in the body. Left untreated, this can create major problems in not just the muscles but also in the internal organs as well. The muscles deep to the superficial fascia and the organs deep to the muscles are also affected. Any pain, spasm or tightness in the muscles is immediately relieved by this new circulation of blood. The organs are likewise revitalized by the increased circulation of energy, blood, and fluids.

Points of stimulation should be determined in accordance with the diagnosis of specific diseases. The most commonly stimulated body areas for treatment include the back, chest, arms , legs, and shoulder blades.

Having scraping treatments, the scraped areas will be covered with tiny, red or purple color dots, which are called "Sha". "Sha" is actually stagnate blood with toxins. The photo may look uncomfortable, but actually the procedure is relatively pain free.

The rash-like appearance of skin is a good sign. If you have a stiff neck, it'll be the result of poor blood circulation of the area and afterwards, you will surprisely fine out how much freer it felt.

How Does Meridian Tapper Work

According to Chinese medicine, all diseases relate to energy blocked in the meridians. By using Meridian Taper to punch the meridian paths can remove the wastes in deep layers of meridian paths and muscles. The results of relieving toxins will be displayed on the skin surfaces, which are purple elevated bruises. These are positive indicators and at the same time take effects of activating blood circulation.